Tourist Places to Visit in Ajmer

Breathtakingly beautiful and historically relevant, Ajmer promises to leave you spellbound and wanting more. Founded by Raja Ajaypal Chauhan in the 7th century AD, the city became an abode of many dynasties like the Mughals and Britishers revered by Hindu and Muslim pilgrims. Famously known for its vibrant Mughal histories and religious attractions, Ajmer attracts tourists from all over the world all round year. Whether you're a history buff or pilgrim, you are bound to find a home in Ajmer. The city of Ajmer blends the lustrous desert vibes with the Aravallis to form one picturesque locale. From tranquil surroundings to a naturally beautiful aura, many enchanting tourist places in Ajmer would blow your mind!

10 Best Places to Visit in Ajmer
Here's a long list of 10 must-visit places to visit in Ajmer that you can explore on the Ajmer sightseeing tour. Ajmer might be a small town but is known for its fine architectural attractions.

1. Dargah Sharif
Located at the end of a desolate hill, is the majestic tomb of Sufi saint Khwaja Moin-ud-din Chishti. It is one of the prominent pilgrimage sites which is one of the famous places to explore in Ajmer. The sufi saint came here from Persia and devoted his life to helping the poor and oppressed. It is believed that the pots were offered by Emperor Akbar when the saint blessed him with an heir to his throne.

2. Ana Sagar Lake
The man-made Ana Sagar Lake was constructed by Maharaja Anaji, the ancestor of Maharaja Prithviraj Chauhan. Afterward, the Mughal rulers made further editions to enhance the lake's beauty. There's a small island on the lake that you can visit. The lake is the Daulat Bagh a garden set out by Mughal Emperor Jahangir.

3. Adhai Din ka Jhopda
The dargah of Khwaja Moinuddin Chishti, Adhai di ka Jhopda, lies on the outskirts of the town. It is one of the famous places to visit in Ajmer where you can reveal the interesting past of the bygone era. The legends say that it was built in 1153 and took only two and a half days to construct. The mosque was later added with many attractions of the years bygone.

4. Akbar's Palace and Museum
The famous archaeological museum was built in 1949 and is located in the Dil-e-Aaram Gardens of Ajmer. The museum is divided into three sections and is one of the best tourist attractions for Ajmer. Featuring a collection of sculptures and some excavated material from earlier civilizations, the museum features two Yupa Pillars. These are adorned with inscriptions from Barnala as well as Prathihara sculptures of the 8th century.

5. Nasiyan Jain Temple
Located at Prithviraj Marg in Ajmer, Nasiyan Temple is also known as Lal Mandir (Red For). It is devoted to Lord Adinath, the first Jain Tirthankara. The Jain temple is a two-stored edifice and is one of the best tourist attractions. One part of this temple is the prayer area holding the idol of lord Adinath while the museum includes a hall and other attractions.

6. Daulat Bagh Gardens
On the banks of the majestic Ana Sagar Lake, Daulat Bagh is a charming little garden dating back to the Mughal era. One of the historical places in Ajmer, the garden, was constructed by Emperor Shiv Dan in 1868. The vast open green space dotted with naturally grown trees imbues a tranquil charm to this place.

7. Nareli Jain Temple
Another Jain temple in Ajmer is Nareli Jain Temple, which is impressively adorned with a blend of tradition and modern-day architectural style. With 24 additional miniature temples placed on the Aravalli hill. These 24 temples symbolize the Tirthankars of Jain, also called 24 Jainalay. The temple became a significant site of pilgrimage of Digambara Jains for its sculptures and elaborate designs.

8. Taragarh Fort
The majestic fort was built in the 12th century AD under the rule of the Chauhan empire. Amongst the best places to visit in Ajmer, this stunning hillfort is well-known for its brilliant architecture with its three massive gateways being the greatest assets. The gateways of the fort are called Lakshmi Pol, Phuta Darwaza, Gagudi ki Phatak, etc.

9. Maharana Pratap Smarak
The historically famous Maharana Pratap Smarak is the last king of Rajasthan. The hilltop memorial monument pictures the king on his horse, riding his way into battle. Witnessing the excellent views of the surroundings, the monument serves as a popular viewpoint in Ajmer as well, making it the most sought-after place to visit in Ajmer one day tour.

With immensely beautiful places to explore in Ajmer, one can see the fine amalgamation of cultures not only in the pilgrimage centres in India. It is enclosed with the quaint fort, museum, and lakes, adorning the city. Experience the thrilling Rajasthan Tour Packages, and make sure you don't miss out on any of these places to visit in Ajmer. 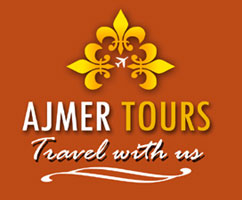